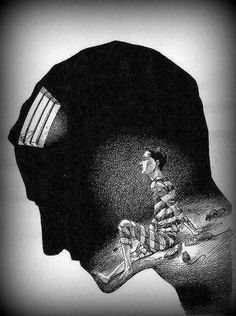 There have been times in my life where i have been locked inside my own head, imprisoned by the very thoughts I was thinking.  Some people may instantly be able to identify with this statement… probably those fortunate individuals who have also discovered the limits of rational thought.  This article is by no means an attack on reason, the world would be a whole lot more sane if more people would apply their faculty for rational thought a little more often… but as usual, we collectively struggle to free ourselves from the swinging pendulum upon which we hurtle from one polarity to another.

Unfortunately, the reality of the prison of the rational mind is rarely appreciated until one has escaped its clutches.  Powerfully depicted in ‘The Matrix’, the full truth of one’s enslavement can only be fully apprehended once the liberated mind has stepped beyond the frontiers of our normal perception.

The problem posed to humanity by the trammelled, linear thinking of civilisation is not insignificant… our collective demise/prosperity depends on our ability to step beyond the limits of rational thought.  Ironically, I will attempt to rationally explain why that might be:

Reason and logic, the basis of Western rational thought… depends on the ability to name, label and categorise.  If we can’t fence something off, then we can’t put it into a box in order to be manipulated by the system of thoughts and symbols we know as ‘understanding’.  In order to build a model of the living world in our heads… we have constructed a complex system of images in our minds that we frequently mistake as ‘the real world’.

The crux of the problem for rational thought is that it is built upon the assumption that we CAN successfully put fences around anything.  Close inspection of this idea will show that it is fundamentally impossible to clearly define the edges of anything… even a simple object.  To the naked eye, the edges of a pen, for example, seem clear and sharp, but the electromagnetic spectrum shows there are fields of energy radiating out in all directions from any given object with no definable limits.

Only when we appreciate the fully inter-connected and inter-dependent nature of reality, can we truly develop a healthy relationship with life.  So how can this understanding be shared with someone who perceives themselves as a discrete object, an independent, separate entity?

So what am I suggesting here?  My point is that we have to confront the limits of understanding… the limits of rational thought itself in order to fully appreciate its proper function.  A hammer, like very other useful implement in a toolbox… serves a specific role and will actually cause damage if applied to the wrong job.

No matter how hard we try to isolate and label all that we might observe in life from nano particles to human behaviours, there always remains an undefinable, unquantifiable aspect of existence.  By confronting the mystery of life and accepting that we can NEVER fully understand everything… this immediately generates a level of humility that enables us to apply rationality skilfully and with much greater empathy.

Human beings who mistakenly think they can ‘save’ humanity from the spectre of anthropogenic global warming by spraying chemicals across the sky are so arrogant in their application of reason as to be mentally insane.  To think that we can understand the mechanics of nature sufficiently in order to be able to successfully intervene in its processes is an act of such immense foolhardiness I struggle to find appropriate words to describe it.  The mechanics of life will always remain incomprehensible to the scientific method… the systems of nature are so complex that it is extremely unlikely the blunt tools of human understanding will ever be able to successfully pierce the secrets of our environment.

Science has developed an enormous library of dead things.  Only once something has been rendered lifeless and immobile can reason apply a semi-satisfactory label for categorisation.  And though we may have a label for every last cell of a human body… cut up and dissected into vanishingly small components… we have never even caught the slightest glimpse of what it might take to animate these components into life.

Though we have seemingly infinite lists of the elements of existence, we have not the slightest idea of how they may be combined in order for them to breathe as we do.  Life is a bountiful mystery that laughs at the ramshackle boundaries we try to impose on it.

We talk about light but have not the faintest idea of what it is… we study the effects of water but have not the slightest idea of how it works… we use electricity but have never even come close to explaining its operation satisfactorily.  The gargantuan gaps in the field of human understanding will never filled as long as we try to paper over the cracks with the designs and motifs whose origins lie in a school of Greek thought that arose only a couple of thousand years ago.

2 thoughts on “The Prison of the Rational Mind: And How to Get Out of It”